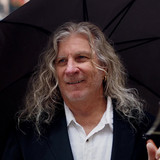 Grammy-nominated composer David Arkenstone blends global, cinematic, and rock elements into his version of new age music, which has appeared in film, television, and video game scores as well as dozens of his own albums. A music lover since age ten, when he moved to California from Chicago, Arkenstone immersed himself in all kinds of music and played keyboards and guitar in numerous bands as a youth. It was when he discovered the lush arrangements and exotic approach of Kitaro that Arkenstone ventured into new age music. The increasing synergy between computer technology and musical instruments also inspired him; most of his works were created partly or entirely on his Macintosh along with synthesizers and guitars. This blend of electro-acoustic textures was showcased on albums like 1998's The Celtic Book of Days and works from his band Troika, which released a series of albums from the mid-'90s to the early 2000s. By that time, Arkenstone's solo career was thriving, with several Billboard hit albums and three Grammy nominations (for 1992's In the Wake of the Wind, 2000's Citizen of the World, and 2004's Atlantis) to his name. As the 2000s continued, Arkenstone branched out, incorporating Egyptian and tropical elements into his music, along with the sounds of the Earth in his Natural Wonders Collection series. He also worked on several acclaimed video game soundtracks, including 2007's World of Warcraft: Taverns of Azeroth and 2010's World of Warcraft: Cataclysm. His horizons continued to expand in the 2010s, and his work reflected the growing influence of ambient and chillout within the realm of new age music. By the time of 2016's Fairy Garden, Arkenstone also returned to the more vibrant, mystical approach of his early work along with forays into dark ambient sounds. In 2017, he paid homage to the romantic culture and cinematic history of Italy with Italian Nights. ~ Heather Phares, Rovi