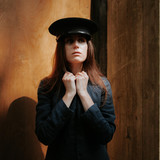 dodie releasesd her eagerly anticipated debut album Build A Problem. At 26, dodie has done a lot of living. Some of that has played out online as she made a name for herself as a singer and writer, amassing millions of fans with her disarmingly honest videos and affecting, intimate singing style. Her debut album, Build A Problem landed at number 3 in the UK charts, with two previous top 10 EPs. Her latest London show at the Hammersmith Eventim Apollo was sick as hell - she has headlined and sold out London’s Roundhouse, the Hollywood Palladium and New York’s Terminal 5, and become an ambassador for Depersonalisation charity Unreal. She's also very cute. dodie may or may not have added some edits to this bio herself.