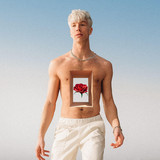 Multi award winner Auður released his first album "Alone" in early 2017. Auður makes music with R&B vibes, and further than that he loves to surprise his fans with innovative ideas of experiencing his music. His single and Song of the Year 2019 “Enginn eins of þú” (No One Like You) was his first release since his breakthrough album “AFSAKANIR” (Excuses) which attracted critical attention for its bold honesty and visceral energy.   EARMILK: "The best kept secret of 2016"   The Line Of Best Fit: "Making music that's unlike anything else coming out of Iceland right now"