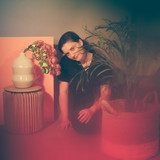 Rosie Tucker is a non-sequitur equestrian, a nonbinary, amphibious harbinger of doom. Listen at your own peril. 🥀 In the world of Sucker Supreme, Tucker's first record on Epitaph Records, melody is king, lyricism is queen, and noise is the old man with the long beard who seems to have come from nowhere and is now making important decisions based on his belief that “some of your organs are just evil”. Noise permeates every layer of these songs. Ticking Geiger counters, synthesized whale calls, blooms of electric guitar repeating infinitely. No one involved is boring enough to say that these are sad songs that sound happy. Some of them are just sad songs that sound sad. But as with all things Tucker, nothing is so simple as to exist in a binary. Male or female, married or divorced, destruction or salvation, these are not two opposite sides of the same coin, they are all related points on the same sphere. It’s 2021! Abolish the binary! Destroy genre! Get a therapist! Sucker Supreme is the first record made by Tucker’s current touring band, drummer Jessy Reed, guitarist Jess Kallen, and bassist/producer Wolfy, a group of people as eager to share their long dead folk heroes as they are their pop punk heartthrobs. On Sucker Supreme, a synth drone rubs up against an Underoath-inspired guitar, arcade bleeps accompany tape slams and throughout it all, Tucker’s voice leads the way. Sometimes yipping, sometimes yelling, always saying the right thing at the right time.