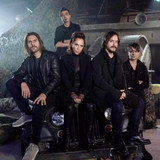 Oceans of Noise sweeps its audience through a sea of emotions into a deep imaginative intensity that can be peacefully dark or surprisingly light. They combine flawless rock with originality. They enjoy venturing across cultures and boundaries into the NOT SAFE, rebutting the norms with FINDING WHITE IN BLACK and weaving opposite feelings with NO SECOND TROY. The band offers a surf of self-discovery to the listener. It was this very self-discovery that brought the leading soprano and award-winning talent Sertab, guitarist Emre, bassist Eser, keyboardist Ozan and drummer Alpar together in 2015. They pooled their passion and talent to release their first EP in summer of 2017 at Omeara, London. Their melodic intensity with blustering chemistry did not go unnoticed. Soon after, Grammy-nominated producer Joel Hamilton produced Oceans Of Noise’s self-titled debut EP in late 2017 and their second EP in 2018 at Studio G in Brooklyn. Since then, they have shared the stage with timeless names such as Joe Satriani, Liam Gallagher and Imagine Dragons and will prove timeless themselves. Their second EP has a cover version of Massive Attack's “Teardrop” and is a testament to their globally recognized energy. Let the Ocean of Noise current you through their peaks and troughs.