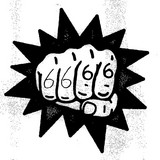 Sometimes the best way for artists to keep pushing ahead is to remember who their people are – especially when they're the ones they've known for ages and have been itching to work with from the very start. P.O.S and Astronautalis, have been making guest appearances on each other's records for over ten years. That makes a collaborative project like Four Fists both inevitable and necessary at the same time: it's the team-up of two of Minneapolis' most stylistically fearless artists, both of whom simultaneously inhabit the worlds of hip-hop and indie-punk in a way that the Twin Cities music community has always welcomed. "This is something Stef and I have been working on and dreaming about since we became friends in 2004," says Andy, who moved to Stef's Minneapolis stomping grounds in 2011. Two years later, the first Four Fists 7" offered up two sides of finger-clenching post-hardcore for hip-hop heads, showcasing their powers as MCs, vocalists, producers, and songwriters. The span between 2013 and now saw a string of life changes, from Andy's marriage to Stef's struggles with kidney failure to the state of social justice in the world, that shifted both artists' perspectives.

You can hear it in cuts like "Nobody's Biz," a backbreaking drumline run through with entreaties to action, or the reflective chiptune burble of "G.D.F.R." and its attempted reckoning with how these two artists even made it to where they are.