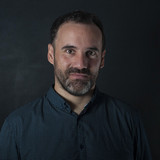 Born in October 1974, Fabrice did 5 years of music theory and 2 years of classical guitar in a music school. After his first synth, he forms a duet with a friend. Then quickly, another variety / rock group forms and a concert in front of 300 people. After a period of wedding entertainment, comes a cover band, focused on French rock. Many concerts will be given in bars but also nightclubs in Bourges. Then comes a solo work with research on sounds and arrangements. After joining SACEM, he unsuccessfully applied for castings (unsuccessfully). He therefore deposited his compositions on a music site and obtained up to 7,000 downloads. In 2016, he reformed a variety group and another as a musician (keyboard). Many concerts will be given in the space of 2 years. In the summer of 2019, he decided to professionalize as a songwriter and start as a professional, while continuing to train in sound. His music "the waltz of time" has been shared 10,000 times on Facebook.