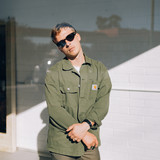 Australian singer and songwriter Lawson Hull merges fascinating prose with cinematic production and artful songcraft on his 2021 EP, Hangin’ Out with Cowboys [Nettwerk]. Personally, he’s “not much for wearing cowboy hats – still working up the courage.” However, much like the title suggests, he’s got a few friends who are. This body of work bottles the expanse of the Outback’s breathtaking vistas into robust guitars, dreamy beats, and chantable hooks. With a little poetic license and tasteful embellishment, Lawson’s deft and dynamic storytelling brings these tracks to life with all the gusto of a classic flick. Inspired by a range of artists from Bon Iver to Bombay Bicycle Club, Lawson first gained attention when his song “Paint” gained millions of Spotify streams. In 2020, he signed to Nettwerk and released his acclaimed debut EP, Dreaming Is Easy -- six tracks rooted in folk and dream pop melodies. At the top of the global lockdown, he hunkered down in his bedroom and started to write. As restrictions eased, he traveled to Sydney in order to demo tunes. Along the way, Hangin’ Out With Cowboys took shape both musically and thematically. “The songs were a bit different and immediately felt fresh to me. Stories were popping up in my head with a little bit of a western twist. I got the title from hanging out with some friends who have cowboy style but live in the city. They’re great people and real characters,” he smiles.