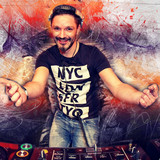 Charismatic DJ and producer Shaun Bate has established himself nationally as well as internationally over the years. Born and raised in the South of Germany he started as a resident DJ ten years ago.Multiple top 10 rankings in several charts and an impressive reference list including RTL2, ZDF, BILD highlight his talent. When his project "Lolita Jolie" went straight up the official charts with the debut single "Joli Garcon" there was no stopping him. He perfected/improved his "Dance-Charts-Subscription" with numerous hits like "Don't You Worry - Radio Edit" , "Narcotic", "Basket Case", "Doubledecker" and "Moi Lolita". World-famous artists, among them also Timbaland, Akon , Nightwish, Razorlight or Shaggy have already relied on his skills. Due to his friendly and humorous character, his intuition for innovative music and cool sounds/vibes he convinces again and again.