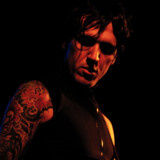 Marco Trentacoste is an Italian-born musician, producer and mixer based in New York. Trentacoste grew up in Milan and started his career in his late teens when he formed the metal band V.M.18 with Andy Barrington, an ex-member of Death SS. When V.M.18 split up, Trentacoste went on to produce and mix various artists for several years before joining the alternative rock band Deasonika as guitarist and producing all four of their studio albums. In addition to playing, Trentacoste has mixed and produced various high profile artists in Italy including Le Vibrazioni, Giusy Ferreri and Lacuna Coil. Since 2013, Trentacoste’s focus has been on mixing and remixing with international artists - including KMFDM, Dope Stars Inc., Living Dead Lights - on alternative rock and industrial albums. For his production and mixing of the album of Chinese rock artist, 谢天笑

Xie Tian Xiao, Trentacoste was nominated for a Golden Melody Award in 2018. Trentacoste moved to London in 2015, and subsequently to New York in 2020.