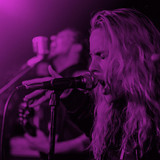 The Shrines - New Danish rock duo releases 2nd single In their new single, Nightfall, The Shrines take on the fights and the odd feelings of freedom that comes with being strongly attached to someone. With stealth and raw authenticity, The Shrines bring you their 2nd single: Nightfall! Nightfall is released on Friday the 13th of July. It will available on all platforms + download. The Shrines recently moved from Denmark to Hamburg to pursue new horizons, but they’ve brought their cool, Scandinavian rock sound with them! Inspired by acts such as The Kills and Jack White, The Shrines also have strong musical connections to the Californian desert rock sound. When they take the stage, solely accompanied by an MPC xl2000; an old school hip hop sequencer, they keep that honesty and simplicity alive!