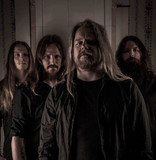 Formed under the name FORLORN in 1990 with two sole members; Crister Olsson and Daniel Bryntse. After years of turmoil, in which the band recorded several demo tapes and suffered a myriad of line-up changes, I Hate Records approached them in 2003. The band saw it fit to adopt a new moniker; ISOLE. FOREVERMORE was released in 2005 and followed up with a 7″ THE BEYOND in early 2006. Isole now had a steady line-up with the addition of Jonas Lindström on drums and Henrik Lindenmo on bass. The next album, THRONE OF VOID delivered an even darker sound than it’s critically acclaimed predecessor. The band then signed with Napalm Records and released BLISS OF SOLITUDE. The album received overwhelming positive feedback from fans and critics alike; however, Isole did not fall prey to idleness and continuously worked on new material for their fourth album, SILENT RUINS. After releasing four albums in four years they decided to focus on playing live in order to gain some perspective. After touring in 10+ countries, the band unleashed BORN FROM SHADOWS in 2011. Then Henrik left and Jimmy Mattsson joined. 3 years later they began working with Cyclone Empire which resulted in the slightly more progressive THE CALM HUNTER. Then Jonas decided to quit the band and Victor Parri joined. The following years were spent on the road but then in 2017 it all went quiet... Now the time has come for a new chapter. Allied with Hammerheart Records the new opus DYSTΩPIA was released in 2019.