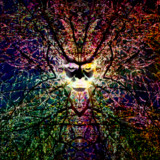 Astralseid makes music for you to either lie down and journey within, or even better, dance naked around a huge bonfire. With deep drones, booming rhythms and ethereal vocals Astralseid takes you out of time and brings you inwards, towards your own core. The project was started late in 2018 with the release of the demo song: Skydance. In 2020 the first digital album was released: “Spirit Symbiosis” , a deep and atmospheric psybient (psychedelic ambient) album. In November the same year, the second album, "Shamanic Love" found its way out into the world, a deep psychedelic and mystical journey. Finding inspiration within nature and the nature of life, the songs are made through improvisation and exploration of sounds, rhythms and melodies. All steps of the production process are done by Gustav Holberg in an off-grid, earthen cabin, situated on an organic mountain-farm in Western Norway. Gustav Holberg have been making acoustic music for decades, mostly in the nordic folk and experimental genres. Combining a multitude of instruments and vocal styles with electronic sounds and beats gave birth to the hybrid called Astralseid. Astralseid does frequent collaborations with Rúnahild, a unique solo artist making ethereal folk/rune folk.