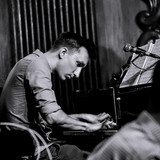 Michael R. Oldham (b. 1989 Braidwood, IL) is a composer, pianist, and songwriter who weaves artwork, story, and imagination into his work. Whether experimenting with looping videos on Instagram as the "parts" of a piece that anyone can play ("Music In Segments" - 2018), utilizing repeating gif images of silent films as inspiration for a twelve-movement work ("Music In Gifs" - 2019), or translating great works of art into music Suggestion Box: Art, Michael's thirst for unusual storytelling through music is never quenched.

He has already released Letters of Recommendation for New Romance - a single from his upcoming album, "A Closer Look Reveals," out this year. Continuing this trend, his work as composer-as-storyteller is ever-present in the albums, EPs, and singles he has self-released. Recent albums include In Select Theaters (2019), which is an album influenced by silent films and storytelling through imagery, "Three Vignettes" (2017), which is a work of three movements with short stories for violin and piano, The Los Angeles Miseries (2016), which is a set of pieces for solo piano on perspectives attained while driving across America from Chicago to Los Angeles, Grand Delusions on a Small Scale (2015), which features early solo piano works, as well as "Fantasies for Piano" (2014), which is a six-movement dissection of some of his favorite songs by artists including Fiona Apple, Dirty Projectors, My Brightest Diamond, Andrew Bird, St. Vincent, and Sufjan Stevens.