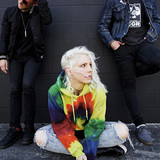 Garage rocking like the White Stripes, shooting out cutting lyrics like Patti Smith, and filtering all through the most psych of psych rock, the Vitals are an L.A.-based trio featuring Kate Strand (vocals, guitar), Henrik Linde (guitar), and Dylan Howard (drums). Good friends before they became a band, the group debuted in 2012 with the album Qualia, which appeared on the ORG Music label. The EP Gold Night followed in 2015 and was supported by a tour of Europe opening for the band Tracer. In 2016, the band issued the single "Come Undone," their moody cover version of the 1993 Duran Duran hit. ~ David Jeffries, Rovi