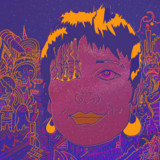 March is the project of songwriter and multi-instrumentalist Kitty O'Neal. Over the years her story-telling has evolved into a unique pool of sound, transcending the borders between contemporary folk, indie, pop and electronica. With thoughtful harmonic changes and an often through-composed style reminiscent of prog-rock and jazz, March has incorporated her diverse tastes into new album 'All of the Above'. The album was part-funded by Help Musicians UK ‘Do it Differently’ fund for independent musicians, and was recorded between home studios, The Royal College of Music and Spiral Studios in Guildford. All of the Above explores themes of dreams, identity and memory, embracing the changes in relationships and the ebbs and flows of living. The album showcases March's competent and introspective lyric-writing, her distinctive and emotive vocal performance, and moments of pure musical creativity. March cut her teeth as a solo artist on the Southampton/south UK coast music scene, and has performed across the south of England, including multiple slots at Glastonbury and Sofar Sounds, and opening for artists including Rae Morris, Rozi Plain, Orla Gartland, Band of Skulls and Fiona Bevan.