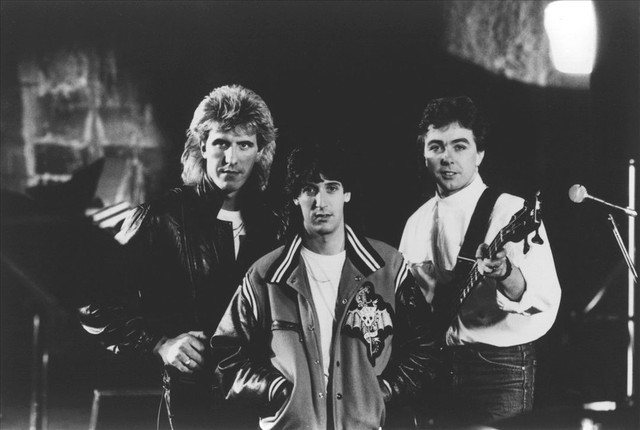 Ironically, given their obsession with America's favorite pastime, the Outfield got their start in London's East End. Playing under the name the Baseball Boys, the trio of bassist/singer Tony Lewis, guitarist/keyboardist John Spinks, and drummer Alan Jackman played around London and recorded some early demos, attracting the attention of Columbia/CBS Records. They were signed shortly thereafter and began working on their debut album, Play Deep, which was released in 1985. The record was a smash success, going triple platinum, reaching number nine on the album charts, and producing their biggest song, "Your Love," which was a Top Ten hit. To support the album, the band launched an international tour opening for Journey and Starship. The Outfield began recording their second album in 1986, and in 1987 issued Bangin'. While not duplicating the huge commercial success of their debut, it did produce two hit singles, "Since You've Been Gone" and "No Surrender." The group's third album featured a bit of a stylistic shift and was more meticulously produced than their previous efforts. Voices of Babylon, released in 1988, produced a single of the same name, but the band's commercial success was slipping. Jackman left the group after it was recorded, and they hired Paul Reed to step in as drummer for the Voices tour. Spinks and Lewis, now officially a duo, switched labels and began recording Diamond Days for MCA. A new session drummer, Simon Dawson, joined them and helped add an electronic edge to their sound. Diamond Days produced one of their biggest singles, "For You." They followed up with 1992's Rockeye. Its single, "Winning It All," became a feature at sporting events and was on the soundtrack of The Mighty Ducks. Simon Dawson had become increasingly involved in the shaping of the Outfield's sound and became an official member of the group at this time. They went on hiatus for much of the mid-'90s, returning to record an exclusive release for their fan club, entitled It Ain't Over, then embarking on a kind of '80s revival tour. In 1998, they released Extra Innings, which was a compilation of several songs they wrote during the '90s, and also featured four new songs written in 1998. The Outfield reunited in 2006 for the release of Any Time Now. Bassist and lead singer Tony Lewis died on October 20, 2020, at the age of 62. ~ Stacia Proefrock, Rovi