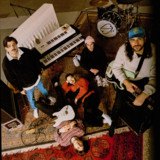 On 20.08.2021 the third Leoniden album with the title "Complex Happenings Reduced To A Simple Design" will be released – but first of all "New 68" will be released as this campaigns last single. The most political song the band has produced so far -a catchy empowering hymn for change. "New 68" tells of how it feels to be confronted with an increasingly apocalyptic news situation and yet not lose hope for change. Hope is given by strong personalities who are committed, politically, socially, and who want to fight in order to make the world a better place – day by day.