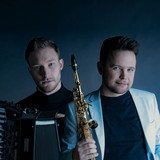 Called „outstandingly talented and creative musicians“ by Musikverein Vienna, Duo Aliada consists of saxophonist Michał Knot and accordionist Bogdan Laketic. Since their founding in 2013, the duo has quickly caught the attention of the classical music world, resulting in a busy concert schedule with more than 150 performances in over 30 countries, many in illustrious concert venues such as the Carnegie Hall, Tonhalle Zürich, Wiener Musikverein and the Hermitage Theatre in Saint Petersburg to name a few. Duo Aliada unanimously won Grand Prix at the 12th Fidelio Wettbewerb in Vienna. In 2018, Duo Aliada has won 3rd Prize at the M-Prize Chamber Arts Competition, University of Michigan in Ann Arbor (MI). The duo recorded their debut studio album “New colors of the past” (2015, ARS Produktion) and it has been received with tremendous critical acclaim. They were also selected for the international program “The New Austrian Sound of Music 2016-17”, a prestigious sponsorship platform funded by the Austrian Government. Duo Aliada have been regularly featured on popular european radio broadcasts such as ORF1, SWR2, BR Klassik, and Radio Klassik and they couldn’t be more excited to continue sharing their unique music with audiences all around the world.