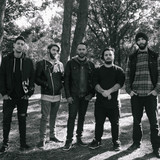 We are a Uruguayan progressive metal band very identified with the Djent movement. We started making music in 2012 and during our early years we concentrated on finding our own style and sound. In 2017 we released our first album "And The Red Death Held Sway Over All" with a style more oriented towards metalcore and deathcore. Although during these last couple of years we were mainly focused on composing, recording and getting used to a couple of line-up changes, in 2019 we had the possibility to play with Monuments, one of our greatest influences. The last 05/25/2020 we released our newest album called “Inner Cycle”. "Inner Cycle" is about the duality that a person in conflict faces caused by a experience of grief and loss. On one side there is the possibility of surrendering, while on the other side, there is the sacrifice of overcoming and moving on. Eternal cycle of rediscovery and self-improvement. We only can really build and rearm ourselves when we manage to destroy everything we had. DSE is: Santiago Astengo Fabricio Araujo Ignacio Barbero Erik Cervini Jorge Sivsov