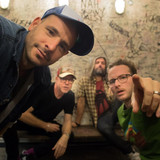 Often compared to Coldplay and Travis, Turin Brakes are a English duo inspired by folk and progressive rock hailing from Balham, London. Olly Knights and Gale Paridjanian were friends in elementary school and decided to try out for the cathedral choir because it would give them the chance to perform in front of the Queen of England, which they eventually did. The two aspiring musicians, influenced by a unique range of artists including Sebadoh, Truman's Water, Prince, and the Black Crowes, formed a band and recorded their freewheeling jam sessions. One of those sessions became their first release, The Door EP, which was released on Anvil in 1999. The State of Things EP followed the next year on the Source label. Turin Brakes expanded into a full band and moved up to appearances at the Reading and Leeds festivals. A third U.K.-only EP, Fight or Flight, was released later in 2000, as the band was opening for the likes of Kathryn Williams, Doves, and Lowgold. The debut Turin Brakes full-length, The Optimist LP, was released in 2001 through Astralwerks. Arriving in 2003, the successful Ether Song brought the group more fans, and was followed by the more polished Jackinabox two years later. Teaming with producer Ethan Johns, Turin Brakes began work on their fourth studio album in early 2007, and while the group had to take a break in recording after Paridjanian and his wife celebrated the birth of their daughter, Dark on Fire was still released in the fall of that year. In 2010, Turin Brakes returned to their melodic folk-inflected roots with the album Outbursts, their first release for the noted U.K. indie label Cooking Vinyl. Two years later, Knights released the solo album If Not Now When. In 2013, Turin Brakes reunited for their sixth studio album, We Were Here, followed by extensive touring in Europe and the U.K. and an appearance at the South by Southwest Music Conference in Austin, Texas. In late 2015, Turin Brakes announced they had emerged from Rockfield Studios in Wales with a new studio album; titled Lost Property, it was released in February 2016. The group supported the LP with an 18-month tour that covered the U.K., Europe, and Australia. Once they returned home, Turin Brakes soon returned to the studio, and their ninth album, Invisible Storm, was released in January 2018. ~ JT Griffith, Rovi