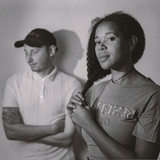 Girlhood are a London based duo consisting of Christian Pinchbeck and Tessa Cavanna,. Drawing

inspiration from the shared sounds on which they grew up, taking cues from Fugees, late 80s hip hop and The Avalanches, the group use Christian’s narrowboat - still docked on a London canal - to write, record and produce their music, bringing a distinctly British setting to their worldly and diverse range of influences. Debut self titled album out 23 October on Team Talk Records.