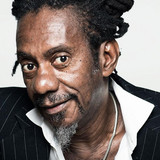 An outsider to the recording industry, Luís Melodia is a talented composer and interpreter who has paid the price of his independence with an erratic discography. His songs, several of which are classics of MPB (like "Juventude Transviada," "Pérola Negra," "Magrelinha," "Dores de Amores," "Vale Quanto Pesa," "Pra Aquietar," "Ébano," "Presente Cotidiano," "Estácio, Holly Estácio," and "Farrapo Humano") were recorded by several artists such as Gal Costa, Maria Bethânia, and Zezé Motta. Son of Osvaldo Melodia, sambista of the traditional samba enclave of Estácio (in Rio), Luís Carlos dos Santos was involved in music from childhood. He left high school in his teens and formed the group Instantâneos, devoted to renditions of jovem guarda and bossa nova hits. In the ‘70s, his blend of traditional samba and pop music caught the attention of poets Waly Salomão and Torquato Neto. Salomão introduced Melodia to Gal Costa, who recorded his song "Pérola Negra" for her album Gal a Todo Vapor (1972). In the same year, Maria Bethânia recorded "Estácio, Holly Estácio" for her album Drama -- Anjo Exterminado. It was then that he adopted the stage name Luís Melodia. Melodia recorded his first LP in 1973, Pérola Negra. From his next album, the classic tune Maravilhas Contemporâneas (1976) was chosen as the theme for the soap opera Pecado Capital. In 1975 Melodia reached the finals of the Abertura Festival (TV Globo) with "Ébano." In 1980 he recorded Nós, featuring his trendy interpretation of "Negro Gato" (Getúlio Cortes). After a long period of ostracism, during which he continued to record, Melodia returned to the hit parades with his rendition of "Codinome Beija-Flor" (Cazuza). In 2001, a documentary directed by Karla Sabah portrayed his life. ~ Alvaro Neder, Rovi