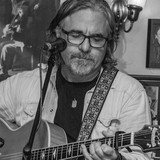 “Music is made to share” Mild-mannered Toronto elementary school music teacher by day, mild-mannered singer/songwriter by night, Tyler Ellis has happily percolated along in his own little musical world since the release of the critically acclaimed “Straid Hill” in 1995 on The Dark Light Music label (home, at the time, of Willie P. Bennett and The Leslie Spit Treo). As “one of Canada’s best songwriters” (according to Julian and Folk Music Ontario's Songs from the Heart Awards 2019) and “the best music teacher to ever walk the earth” (according to Posey and The Toronto Star Readers' Choice Awards 2019), Tyler has shared a lot of music with a lot of people over the years. Whether hosting the long running Riverboat Monday Open Stage, performing shows with the band, writing ditties for CBC Kids, co-writing with The Julian Taylor Band, talking about music education on CBC Ideas (Ballad of the Tin Ears), presenting university lectures on the joy of singing (“Bad Singer/Good Singer with author Tim Falconer), directing his 75+ member junior elementary choir or just working on his craft, for Tyler it’s always just “Music as Usual”. “Canadian Heart” Mitch Potter of the Toronto Star hit the nail on the head in his review of “Straid Hill” so many moons ago: “John Prine meets a well-primed Sir John A. Macdonald with Crazy Horse playing backup” Nobody sings Canada like Tyler Ellis.