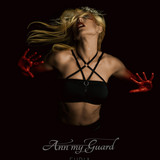 After three album releases and years of touring all over Europe, Ann my Guard have achieved significant success in the alternative metal scene. Their latest album MOIRA was nominated for ‘The album of the year’ at the Hungarian Metal Awards, as well as at the country’s 'Grammy', Fonogram Awards in ‘The best national hard rock or metal album of the year’ category. Besides Hungary, the band has been always focusing on their international audience as well with their albums and tours. Working with labels from Norway, UK, Germany and The Netherlands, they have grabbed the media’s attention with their unique sound as some critics say it is ’mysterious, dark and uncategorized’. In 2020, the band released a new single called ‘v0id’ and has started to work on their new material called FURIA which will be released later in 2020. Ann my Guard have been actively touring in Europe since 2015, including The Netherlands, UK, Germany, Austria, Czech Republic, Romania, Serbia, Poland, Portugal, Italy, and Spain.