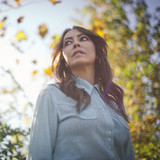 India Ramey's new album -Shallow Graves- kicks off with a shudder of woozy, western guitar, sounding as much like the soundtrack to some long-lost cowboy epic as the follow-up to Ramey's critically-acclaimed national debut, Snake Handler. Progressive, gritty, and darkly cinematic, this is a record inspired by the turbulent present, stockpiled with songs that take aim at the liars, leaders, and hypocrites among us. Ramey calls it her "post-apocalyptic western," and she fills the album's tracklist with plenty of fury and alt-country firepower to match.