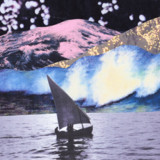 From the West Coast of Ireland, this alternative indie rock band brings sombre themes to life with their easy-going sound, raw vocals and thrumming backing. After forming in secondary school for a music practical, they spent years playing in bassist Áindles front room trying to hone their sound before it was ready for release.

As regulars on BBC6 Music playlists and Spotify playlists, they have gained lots of traction since their first self release ‘How’.   “The group craft gorgeous shoegaze-y indie gems, with a handful of bops that have already seen them lauded as a group to keep your eyes on.” – DIY “Taking their shoegaze with a sprinkling of dark pop sugar, NewDad’s moody, hip-swinging guitarwork is the product of a group of pals who are allowing themselves to follow their musical nose without paying too much attention to trends.” – NME “They have an irresistibly catchy sound, with Julie Dawson’s vocals a particular strength. NewDad’s guitar anthems have serious hit potential because they have that x-factor that connects. With Jack Saunders and Steve Lamacq as fans, they could be well on their way.” – Hot Press “Dreamy, hazy and whipping its own stunning world around itself; it’s a shimmering next step from the Galway four-piece.” – Dork   Booking: jsimmons@wmeagency.com Press: ash@drystonepress.co.uk Radio: ivano@braceyourselfpr.com