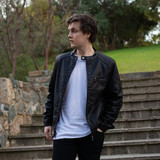 Mitchell Martin is an independent pop artist from Perth, Australia. His music is self-reflective, dynamic and demonstrates that he understands the power of a great hook. Not afraid to dip his toes into other genres, he has written songs influenced by rock, folk and soul, whilst maintaining his pop sensibilities. His biggest independent release to date Dim the Lights was heavily rock-influenced, giving him the opportunity to show off his musical prowess by recording all of the guitar and bass parts himself. A lover of collaboration, he pushes his songwriting further by working with producers from around the world to top-line many EDM songs - some of which have now surpassed one million streams. Having performed in front of 50,000 people at Optus Stadium, live on national television for Telethon and on the main stage of multiple major festivals, he proves that he is not just a recording artist but an incredible live performer. Although completely independent, he has earned the opportunity to support the likes of Killing Heidi, Sheppard and has self-booked multiple tours of Western Australia. Having sold out his last headline show in Perth, his eyes are now firmly set on larger scale tours. Having won the National Campus Music Competition's prize to record at Grove Studios in NSW, it is set to soon be a reality. Mitchell Martin is currently building his team, recently signing his first global endorsement deal with Electro-Voice. Sync/Publishing: mitchellmartinmusic@gmail.com