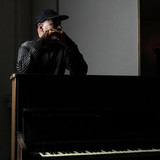 Mario Verandi is an Argentinean-born composer, musician and sound artist living in Berlin. With an extensive artistic career, Mario Verandis works are wide-ranging and include electroacoustic and experimental music, music in modern classical and ambient style, live electronic performances as well as sound installations and music for dance, radio and theater. He has also collaborated with several musicians and visual artists. He plays piano, guitar and percussion and uses diverse electronic devices to create music that incorporates both, the reassurance of the familiar and the stimulus of the new and unexpected.