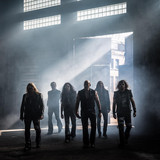 A European power metal combo known for melodic riffing and lyrical bombast, Primal Fear emerged in the late '90s. Based out of Germany and founded by former Tyran Pace and Gamma Ray vocalist Ralf Scheepers and bassist Mat Sinner, the band's compelling blend of speed and melody (intricate dual-lead work and soaring vocals) evokes NWOBHM greats like Iron Maiden and Judas Priest, the latter of which courted Scheepers after the departure of Rob Halford in 1991. Primal Fear became fixtures in the European heavy metal scene during the 2000s, releasing a slew of well-received albums, and found mainstream success in the 2010s with the release of Unbreakable (2012) and Delivering the Black (2014), which charted both at home and abroad. Formed in 1997 around the talents of Scheepers, Sinner, guitarist Tom Naumann, and drummer Klaus Sperling, the band quickly recorded a handful of songs for Japan-based record company JVC Records. Those tracks caught the attention of Nuclear Blast, who signed the group the following year and released Primal Fear's eponymous debut album, which charted regionally and featured a guest appearance by guitarist Kai Hansen of Helloween and Gamma Ray fame. Guitarist Stefan Leibing joined ahead of the release of 1999's Jaws of Death, which saw the departure of Naumann due to health problems, and the arrival of new guitarist Henny Wolter, who made his studio debut on 2001's Nuclear Fire. That LP led to the band's first U.S. appearances in the guise of several large metal festivals, and they returned to the studio in early 2002, recording and releasing Black Sun, which featured a guest spot from Halford six-stringer Mike Chlasciak. Wolter departed the scene shortly thereafter, allowing Naumann to return to the crew. Sperling left the group the following year and was replaced by kit man Randy Black, who appeared on the band's fifth LP, 2004's Devil's Ground. That album included what would go on to become one of Primal Fear's most notable songs, "Metal Is Forever," and was promoted via a massive world tour that saw the group hitting Europe, Japan, the United States, and South America. Released in 2005, Seven Seals was supported by a European and Japanese tour alongside power metal gods Helloween. The band inked a record deal with Frontiers in early 2007, leaving Nuclear Blast to release the best-of compilation Metal Is Forever. New Religion, their seventh full-length and first for their new label, was issued later that September, and saw Wolter returning to the group and Naumann departing once again. The album performed well, and featured a guest vocal from Epica's Simone Simons, as well as ambitious orchestral arrangements from Matz Ulmer and Mat Sinner. Arriving in 2009, 16.6 (Before the Devil Knows You're Dead) heralded the arrival of the virtuosic Magnus Karlsson, who replaced longtime guitarist Stefan Leibing. Issued in 2012, Unbreakable became the first Primal Fear outing to chart in the United States, a feat they accomplished again in 2014 with Delivering the Black, the latter of which featured a guest appearance by powerhouse vocalist Liv Kristine (Leaves' Eyes, Midnattsol, Theater of Tragedy). Citing "irreconcilable differences," drummer Randy Black left the group the following year, and was replaced by Francesco Jovino, who made his Primal Fear debut on 2016's Rulebreaker. In 2017, they issued the live album Angels of Mercy: Live in Germany, with the full-length Apocalypse (their 12th studio effort) arriving the following year. Their next studio album, Metal Commando, was released in 2020. ~ James Christopher Monger, Rovi