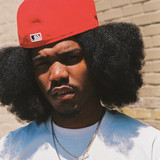 Smino is an artist of substance. After a year and a half on the road in support of his groundbreaking and critically acclaimed debut album, blkswn, the multihyphenate artist, is ready to embark on something new. NOIR, his latest record, is about his present life and reflects a changing Smino, one dealing with “adult shit.” Exponential growth is the reward. “I guess growth for me means understanding shit and being able to make music intentionally,” he says. Music runs through his veins; it’s genetically embedded. Raised in a family of musicians, the rapper and singer began playing drums in his native St. Louis at an early age. As an adult, he moved to Chicago and connected with Classick Studios to release his first two EPs, S!ck S!ck S!ck and blkjuptr. In 2017, he dropped blkswn, which Rolling Stone hailed as one of the 40 best rap albums of the year. Smino once again collaborated with trusted producers like LBoogie, Sango and Zero Fatigue member Monte Booker on NOIR. And songs—with titles like “KLINK” and “TEQUILA MOCKINGBIRD”—offer a lighter contrast to blkswn. That brightness permeates NOIR and inspires Smino’s current outlook. “Just have fun with your fucking life,” he says. “That’s really what I was doing when I was making the record.” NOIR is candid and intricately constructed down to the most minute of details. It is also the best representation of Smino himself: profoundly intelligent, awash in emotional depth, yet not afraid to just have a good time.