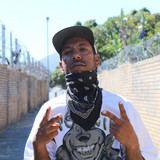 BIOGRAPHY One of South Africa's most profound emcees not to mention arguably one of the hardest workers to date, who is this individual? Well, hes better known as TERROR MC and this is a recap of the future of SA Hip Hop. IN THE BEGINNING KraaiFontein Cape Town, South Africa 1985, born during a period of political turmoil he would face various challenges before becoming known as the straight talking stage tearing machine gun motor mouth we know him as today. He would experience death {and yes, he actually died}and rebirth with after effects that would break even those among'st us of the strongest willpower, this was due to a tragic accident which left him with severe swelling in the cranial region and an imbalance on the left side of his body. Following this was a series of frequent visits to juvenile detention centers and a brief stint in the country's nefarious Polssmoor prison only to be found innocent on all charges, all this before the age of 17 how did he survive this hell? Its simple, a hunger for knowledge, a keen sense for reading people, a sharp tongue and an ever burning passion for Hip Hop. A REASON TO FIGHT AND THE TOOLS TO BOOT Fresh out of the rehabilitation network and sufficed to say displeased with the state of affairs and the futile struggle of the blue collar populace he re assumed his alter ego {by now widely known thanks to the classic track Kaap se VlakteTerror mc is proving to be a force to either align yourself with or avoid if you value your ego