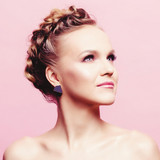 Kadri Voorand is a passionate singer and composer, who’s original music and expression has brought her a number of prizes and performances in Estonia as well as abroad.