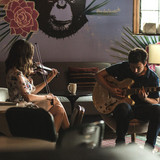 Deer Fellow is an indie folk-pop duo with a “keen sense of song craft.” Based out of Austin, bandmates Matt Salois (guitar, vocals) and Alyssa Kelly (violin, vocals, piano) met at an open mic and were quick to collaborate. Fast forward to present day and coupledom, the two have built a cross-genre sound that “pulls you in right away, stirring romance and broken hearts.”   The duo's vocal harmonies and unique guitar-violin blends have landed them features on KUTX Radio, CBS Austin, and EASTside Magazine. Often compared to the likes of Andrew Bird and The Staves, Deer Fellow's debut EP, Words Unsaid, presents a collection of captivating songwriting and soundscapes that “shine with authenticity.” From live showcases with Austin greats to virtual festivals alongside such artists as Grammy winner John Paul White of The Civil Wars, their songs have garnered attention within the indie music industry.   Fans describe their live performance as an experience that “gives that warm tingly feeling, like taking a bath with a glass of champagne.” The group currently plays all around Austin and plans to go on tour in the near future.