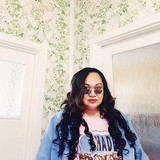 Kaiit, Anderson Paak., Abbey May, Aloe Blacc, Strictly DT and Superego FKA POW! Negro. Hyclass has also had 5 WAM Nominations for the WAM Awards in 2018 and her Single ‘QUEEN’ was also nominated for WAM Song Of The Year Awards 2019 in the Hip Hop & Urban Category. She went on to win the Best Hip Hop Act 2018 & 2019 WAM Award. Hyclass shares the stage with Artists Natalie Mae & Raymond Tanielu as well as performing with local jazz/hip-hop 8piece Premiss. Performing with the collective led her to perform with the WA Youth Jazz Orchestra for a showcase collaboration at Perth Fringe Festival, 2017. As well as a lead debut role in Perth’s Fringe Festival 2018 highly popular play ‘SUGAR’ that had an extremely successful first run in selling out 11 consecutive shows. As Hyclass continues to grow and experiment with different mediums of performance art there is no doubt her first love is music. Stay tuned as more comes from the world-class, Hyclass.