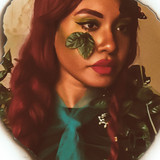 Reflecting the strength of a woman in charge of her own destiny, Nico Fox is a producer, vocalist, keyboardist and guitarist based in New York City who performs solo under the name Real Clothes. She is a one-woman powerhouse who has played over 100 shows across the country to a growing audience of fans. A multi-dimensional artist in the truest sense of the word, she is a poet, singer-songwriter and media artist who is taking the world by storm. Never one to be defined by the expectations of others, she describes her current body of work as a blend of Gothic Wave and Avant-Garde, but has released singles that really stretch the imagination as she explores genres as diverse as Illbient, Vaporwave, Industrial, Appalachian Folk, Noise Ambient, and Chiptune. Her body of work also includes four critically acclaimed and musically distinct albums titled Object-Oriented (2015), Modulation (2016), Apotheosis (2019), and the most recent, Precaution (2020). Her music has been described as dark, deeply evocative and emotional that speaks to the heartbreak and yearning that she has experienced over the years. Combining her original poetry with an eclectic array of sounds and styles, she proves how she can paint textural landscapes that are both complex and enthralling at the same time. As New York emerges to a new world of musical possibilities, Nico Fox and her alter ego Real Clothes will lead audiences into a new dawn that will captivate and demand their attention.