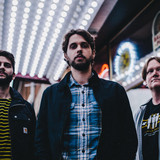 Chill Russell is an alternative rock band from Austin, Texas. DIY Magazine referred to the band’s sound as a “psych-inflected nod to The Beach Boys and The Strokes… they’re not a million miles away from chart-bothering beasts The Black Keys.” Their sound draws from 1960's guitar powerhouses and 1990's alt-rockers, while simultaneously creating their own unique sound. "Their affection for the greats of the past is apparent through their fast, loud, and fun dynamic.” (KUTX 98.9) The trio, which was formed in the summer of 2015, have toured in the US from Austin to NYC, to Chicago and the country’s Midwest. Having performed as an official SXSW artist in 2017 and 2018, the band have been influential in infiltrating Austin’s rock scene. The band released their self-titled debut full length album in May 2018 and have already gained popularity amongst local music critics. "The record is both easily digested but has enough complexity to entertain your average music nerd.” (Greg Ackerman, The Cosmic Clash)