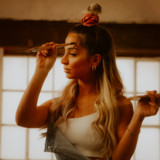 Hasibe Turhan was born and raised in Mannheim, Germany. She wanted to start as an influencer and opened an Instagram account in 2015. In the months and years that followed, she managed to generate more and more followers. In addition to her great passion for being an influencer, singing is also a great passion for Hasibe. Umut Timur has also noticed this, who discovered her talent for singing in 2018. In the months that followed they went into the studio together. and in November 2018 her first single “Kac Kere” followed. After her first hit, Hasibe released her next single called “Kortun Mu?” in February of 2019. Shortly after the release of her second single, followed her 3rd single named “Yarim” which she released in May 2019. After release, this song was an instant hit and in the following months the song has gained popularity. In June of 2019, AYE Music and Hasibe reached an agreement and AYE Music has signed Hasibe as one of their artists.