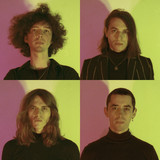 French experimental rock quartet MNNQNS describe themselves as "a rock band that hates rock & roll." Influenced by post-punk, noise pop, psychedelia, the avant-garde, and electronica, their raw and ragged sound is built around catchy melodies and straightforward song structures. Formed in Rouen in 2014, MNNQNS (pronounced "Mannequins") was the brainchild of singer and guitarist Adrian d'Epinay. He had studied in Cardiff, Wales, where he immersed himself in the city's thriving music scene, acquiring a taste for left-field British indie, particularly noise-punk and Welsh psych. There he began writing songs and formulated the idea of putting together a band. Once back home, he set about recruiting members. After numerous changes, the lineup eventually settled with Marc Lebreuilly on guitar, Félix Ramaën on bass, and Grégoire Mainot on drums. The album Worthless, self-released in 2014, largely flew under the radar. Joining a loose scene of bands in their home town, they honed their chops with live performances. Their effort paid off when they won the prestigious Ricard Live Music Prize, which helped boost their career. After the self-released EP Capital, they signed to cult British label FatCat in 2018, releasing the Advertisement EP. Their debut full-length for the label, Body Negative, appeared in 2019. ~ John D. Buchanan, Rovi