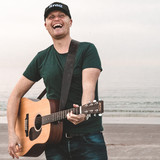 "I live by the beach; when I look out through my studio window I see surfers walking by on bare feet, on their way to catch a wave. Moving out here has changed my life, I love the sound of the sea, and the relaxed vibe of people when they're close to nature. I feel intensely lucky to be living a much quieter life now, writing songs with sand between my toes, being alive." Jonas Brøg Jonas Brøg is an emerging Danish singer, songwriter and producer who started his musical career as a world touring drummer playing for artists such as Sister Sledge, Westlife, Gloria Gaynor, Roy Hargrove, Relax, Postmen a.o. This career was followed by years working behind the scenes as a producer and writer for other artists, until he started writing and performing his own songs.Multiple of those were featured in Spotify’s ‘New Music Friday’ playlists and ‘I Think Of You I Cry’ even found its way to radio in his native country Denmark.