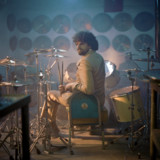 Gaspard Augé has always created brilliantly lurid musical worlds to get lost in. He is best known as one half of Justice, the duo that united rock and rave in the mid-2000s and whose dancefloor smashes defined a generation. His debut solo album this year, Escapades, seals his reputation as a master of maximalism, an electronic auteur whose imaginary soundtracks are a refreshing jolt out of reality. His are deliciously massive dreamscapes and sentimental sugar rushes that conjure images of proggy pagan rituals in orbit or spaghetti westerns on a space station. Let’s face it, the Zappa-like producer was never going to write an introspective record. “I've always been obsessed with making larger than life music,” he says. “Mostly because it's more fun”. The last time we heard from Augé is when he and Justice’s Xavier De Rosnay won a Grammy for their album Woman Worldwide. Justice remain partners and are always working on new music but it was time for Augé to figure out his musical identity outside of the duo, he says. He knew that he wanted to make something instrumental and to experiment freely, “without overthinking it”. The result is something that sounds like little else on earth: there are some elements that are of course spiritually in tune with Justice – the way the synths crunch and whirr, the cinematic enormity of it all – but Escapades sounds like a UFO landing from another galaxy, or time, a baroque masterpiece that reimagines European classical music for this century.