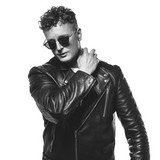 Ascending from obscurity to become one of the most sought-after names in the dance music scene, the last few years have been exceptionally good to Kryder. Deciding at a very young age that his only career path would be one in music, it would take another few years before he stepped out of the shadows into the eyes and ears of today's mega producers. Achieving accomplishments such as a place in the top 10 of 1001Tracklists 101 top producers in the world, as well as official remixes for Swedish House Mafia, David Guetta, Armin Van Buuren, Robin Schulz, Kolsch, and many more, he's also collaborated with Steve Angello, and Benny Benassi, and toured internationally across 50 countries. Gracing many of the most iconic stages in the dance music scene such as Tomorrowland, Ultra and Creamfields, He's also the host of a top 5 radio show worldwide, and released on esteemed labels such as Sony, Warner, Atlantic, Spinnin' Records, Axtone, Musical Freedom, Anjunabeats and Armada, as well as hosting his trio of labels (Kryteria, Sosumi and Cartel) which have set the trend for groove house and created their own genre on Beatport.