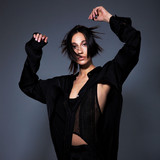 Hi, I’m Tei Shi *~*~* I grew up between Colombia and Canada. I write my own songs ! Making music is my #1 love so thank you for listening and helping me keep doing it <3 ~~~~~~~~~~~~~ Tei Shi is the project of Colombian Canadian singer, songwriter and producer Valerie Teicher. She has released three EPs — Saudade (2013), Verde (2015) and Die 4 Ur Love (2020) and two full length albums - Crawl Space (2017) and La Linda (2019). Tei Shi released her second album ‘La Linda’ as the follow up to her critically acclaimed debut album ‘Crawl Space’. She collaborated with Blood Orange on his album Negro Swan, featuring on the track ‘HOPE’ with P Diddy. Tei Shi also starred in the video for the song alongside Diddy, A$AP Rocky, and Tyler, The Creator and joined Blood Orange onstage at the 2019 Coachella Music Festival. Her most recent EP Die 4 Ur Love talks about losses and the ending of various relationships. ”At the time [of writing], 2020 had already started off to a weird and depressing start for me and I was in this kind of sad, apocalyptic state of mind in the middle of the desert in Texas. It was written in 6 days and the songs came out of that, and just being isolated and confined with myself”.