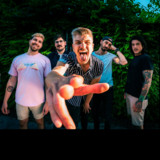 Halfway Atlantic is a pop-punk / emo outfit based in Austin, Texas, founded by German singer/songwriter Matt Warmuth. The band was recently featured on Spotify’s “NEW PUNK TRACKS” and labeled as one the artists to watch for 2021 by Frontstage Magazine. Their music is real, emotional, and honest, buoyed by strong pop sensibilities. Lyrically, their songs are a love letter to adolescence through the lens of adulthood—navigating the same challenges, but with higher stakes. In concert, Halfway Atlantic separates itself from other bands with explosive energy and stage presence, built on the foundation of a charismatic lead singer. Their stripped-down, dynamic live performance—punctuated with leaps, spins, grand gestures and crowd interaction—embodies the polar opposite of shoegazing. Halfway Atlantic has a significant touring resume with members having toured extensively with acts such as The Used, Anti-Flag, Plain White T's, Senses Fail, and Silverstein. In July 2021, Halfway Atlantic released their new single “Back to Austin” and embarked on a 6-show run through Texas with their friends Big Smile. In the fall/winter 2021, the band will record their fourth EP.