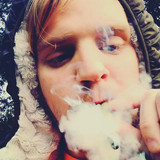 Tyler Joseph Sees [6] (born July 12th, 1997) is an American rapper, singer, songwriter, an upcoming figure in Hiphop Music, Tsee is credited for popularizing the "no giving a fuck and following your gut mentality. He first gained recognition as a musician on his project "Depressed illusions of a past life" with his intent on pursuing a career in music, he plans to bring light to his story as traumatic as it was in hopes it will help other kids (or adults) who been through the same experience. using his content to express free speech and the importance of Authenticity. Over the last couple years this New jersey artist has released some heart felt records like Hell Has a Place for Me and Dead Vibes. fans who have been following since 2011 will tell you about his progress despite failures and fallback and i think we can be clear that this is only the beginning for Tseebaby