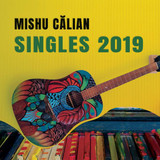 Mishu Călian started his artistic activity at the age of 14, along with the first guitar chords he has learned. In the early 90’s, he was part of the grup called Dangerous Lovers which turned later into F-Act. The group had launched 3 studio albums – Living for a dream (1995), Visul – The Dream (1999) and !eFECT (2000) with Mishu having signed over 20 compositions on these LP’s. Starting 2008 he’s competing in the Romanian national Folk festivals, stunning the jury with his sonority, very different from classical Romanian Folk music. He ends up on the podium on each festival he takes part of, winning the 1st place 3 times along with composition prize. In 2009 he’s laying the foundations of the band Maya which will give a new sound to Mishu’s compositions, moving towards a more “rockish” sound. With Maya, he goes on, winning “Best Progressive Band” award at Battle of the Bands Romania and also taking part in numerous festivals across Romania. He gets his share of screen time on different TV shows. After Maya splits up, the artist felt the need to recreate his melodies the way he always wanted to play them. You can check out the results here, “Noi n-am văzut” (We didn’t see it), being an album that came after 3 years of solitary work. Also, with “Singles 2019” the artist starts a new journey towards what will be a new era in his career. Stay tuned to his profile page as there is more to come in the upcoming weeks with a lot of English songs.