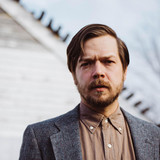 M. Lockwood Porter's Communion in the Ashes is a rallying cry for the hopeless and heartbroken, its lyrics set to a soundtrack of anthemic heartland rock & roll. This is a record that addresses our modern-day social problems from a perspective of hope, encouraging those who listen to focus on activism and community-building rather than despair. Along the way, Porter delivers some of the most engaging, electrifying songs of his career, rooting these melodic calls-to-action in the stomp and epic swagger of a five-piece road band. Throughout Communion In The Ashes, Porter’s electrifying “dystopian gospel band” explores how frightening our world can be. The record’s enthralling cover art — designed by William Schaff, known for his longtime association with Songs: Ohia's Jason Molina — shines a light on that horrifying present, depicting a man (A preacher? An organizer? A demagogue?) addressing a crowd from the foreground of a burning, decaying city. With its Springsteen-sized catharsis, though, Communion in the Ashes offers listeners something new: a soundtrack with which to rise up, rebuild, and renew. Call it protest music if you'd like. Call it a political album if you must. Whatever the description, Communion in the Ashes packs the strongest punch of Porter's career, capturing not just one man's reaction to the present day, but an entire community's opportunity to better their own tomorrows.