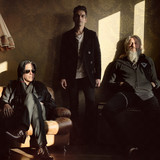 Gone Is Gone is an atmosphere-driven, heavy rock trio built around the talents of At the Drive-In drummer Tony Hajjar, Queens of the Stone Age guitarist Troy Van Leeuwen, and Mastodon bassist/vocalist Troy Sanders. Founded in 2016, the group issued an eponymous EP in July, with its debut long-player, Echolocation, dropping in early 2017. Three years later they returned with a sophomore full-length, If Everything Happens for a Reason...Then Nothing Really Matters at All.