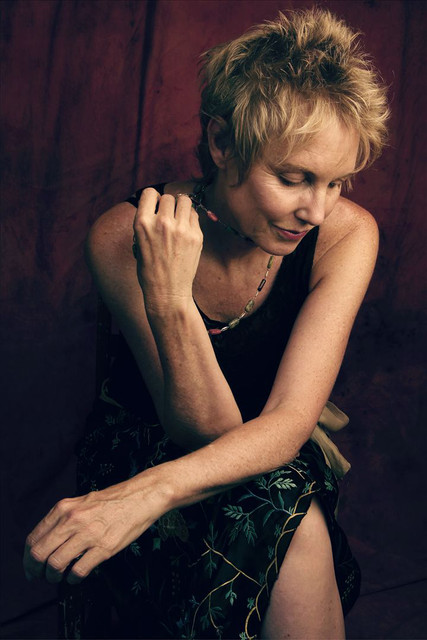 A gifted singer and songwriter who has never been afraid to share her opinions or bare her soul, Eliza Gilkyson's music reflects a forgiving conscience as well as a belief in social justice and an openness to emotional honesty. Stylistically, Gilkyson is an artist whose sound has evolved steadily over the course of a career that spans six decades, but each change feels like an honest extension of the caring, concern, and dashes of sly wit that are constants in her work. Her musical boundaries have encompassed the mystical, new age-adjacent sounds of 1987's Pilgrims, the more soulful folk and blues hybrid of 1993's Through the Looking Glass, the introspective folk-pop of 1997's Redemption Road, the impassioned rootsy tone of 2002's Lost and Found, the wiry rock-leaning folk of 2011's Roses at the End of Time, the philosophical musings of 2018's Secularia, and the gentle but determined activist spirit of 2020's 2020. Born in Hollywood, California on August 24, 1950, Eliza Gilkyson was the daughter of Terry Gilkyson, a successful musician and songwriter who wrote hits for Frankie Laine, Doris Day, and Dean Martin, charted in the '50s with his group the Easy Riders, and penned "The Bare Necessities" for the classic 1967 Disney animated feature The Jungle Book. Eliza's earliest recordings were of her contributing backing vocals to her father's songwriting demos; her sibling Tony Gilkyson, who would go on to play with the bands Lone Justice and X, also contributed to his dad's work. In her late teens, Eliza left California and made a new home in Santa Fe, New Mexico, where she began raising a family. (Two of her children would later contribute to her music: her son Cisco Gilliland [aka Cisco Ryder and Cisco Gilkyson] as a producer and percussionist, and Cordelia Castillo [aka Delia Gilkyson] as a vocalist.) While she released an independent album called Eliza in 1969, it would be over a decade before she returned to recording with 1980's Love from the Heart, credited to Lisa Gilkyson. A demo cassette, No Commercial Potential, also issued under the banner Lisa Gilkyson, would appear in 1982. Her career as Eliza Gilkyson began in earnest with 1987's Pilgrims, her first release for Gold Castle Records. The album's contemplative sound and mystical themes led to Gold Castle marketing it as a new age album, much to Gilkyson's chagrin. She was in relatively livelier form on 1989's Legends of Rainmaker, which included a cover of her father's song "Greenfields" and a vocal cameo from Bonnie Raitt on "Rosie Strikes Back," a tune Gilkyson wrote about spousal abuse that was also recorded by Rosanne Cash. Gold Castle went out of business and Gilkyson next signed to Private Music, which released 1993's Through the Looking Glass, co-produced by her brother Tony. That same year, Gilkyson was featured prominently on Eolian Minstrel, an album by harpist Andreas Vollenweider; she contributed vocals, played guitar, and co-wrote eight of its fourteen songs. After divorcing her husband, Gilkyson cut 1994's Undressed for her own Revelizations label, and worked with Silver Wave Records to release 1997's Redemption Road; it included the song "Prayer 2000" which she co-wrote with Mark Andes, who had played bass with Spirit and Heart. Gilkyson changed the name of her personal label to Realiza Records for the release of 1999's Misfits, an anthology of unreleased archival recordings. Gilkyson signed with the established folk label Red House Records, which would become her recording home for the next two decades. Her first release for Red House, 2000's Hard Times in Babylon, included another co-write with Mark Andes, "The Beauty Way," that would later be covered by Texas singer/songwriter Ray Wylie Hubbard. Gilkyson toured in support, including a performance for the PBS series Austin City Limits; her session for ACL was released in 2007 by New West Records as part of their Live from Austin, TX series. Gilkyson released two albums in 2002, a solo effort for Red House, Lost and Found, and a collaboration with Ian Matthews and Ad Vanderveen, More Than a Song, issued by Perfect Pitch. Political themes were more present than usual on 2004's Land of Milk and Honey, recorded while George W. Bush was running for re-election; it included guest vocals from Mary Chapin Carpenter, Patty Griffin, and Iris DeMent on the track "Peace Call," adapted from previously unpublished lyrics by Woody Guthrie. It was followed in 2005 by Paradise Hotel, a somber set written in the wake of Bush's re-election. The same year, Gilkyson re-activated Realiza Records to bring out another collection of rarities, Retrospecto. In 2007, she presented her first live album, Your Town Tonight, though it would end up coming out within a few months of the Live from Austin, TX archival set. As Red House Records celebrated its 25th year in business in 2008, Gilkyson joined the party with her album Beautiful World. She joined forces with fellow singer/songwriters John Gorka and Lucy Kaplansky for the 2010 collaborative album Red Horse. The prolific Gilkyson released another album the same year, the eclectic Roses at the End of Time, which was produced by her son Cisco Ryder in their home studio; they teamed up again for 2014's The Nocturne Diaries. Gilkyson re-teamed with her producer son for Secularia, a collection of songs born from a lifetime searching for meaningful spirituality sans constraints of traditional religious belief systems. The album's inner sleeve contains an epigraph from Woody Guthrie that reads: "My religion is so big, no matter who you are, you're in it, and no matter what you do, you can't get out of it." She revisited some earlier songs that fit her theme, wrote new material, and unearthed two poems written by her grandmother, Phoebe -- who co-wrote with Gilkyson's father Terry in the '50s. Following this deeply personal project, Gilkyson focused on political and social concerns with an eye toward peace and compassion on the LP 2020, which was fittingly released in 2020. ~ Mark Deming, Rovi