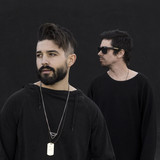 While maintaining a strong following in their home town of Las Vegas, the pop duo comprised of Logan Lanning and Bobby Lucy have also been building a fan base throughout the entire Western United States. GoldBoot was one of the few Vegas locals invited to perform at the Life Is Beautiful Festival alongside acts like The Killers, Foo Fighters, Kanye West, Imagine Dragons, Beck and many more. While recently headlining notable Las Vegas music venues, they have also had the opportunity to be a supporting act for artists including Imagine Dragons, Glass Animals, Metric, Joywave, Moving Units, El Ten Eleven, Bear Hands, Slaves and Parade Of Lights. In November of 2014 GoldBoot won "Artist Of The Year" by Five Of Five Music Entertainment and The Music Industry Studies Program at California State University Northridge. By winning the contest, they were provided the funding to record their first full-length record, BLACKWHITEGOLD. September of 2016 brought GoldBoot their first national exposure when their song “Every Time I Come Down" was used in the premier of Fox Television's new sports drama -"Pitch". GoldBoot have spent the majority of 2017 and 2018 recording and releasing a steady stream of pop singles that can be loved by fans of Michael Jackson, The Killers, Jamiroquai, Prince, Passion Pit, Muse, The Eurythmics and beyond. As the two like to describe themselves, "GoldBoot is a groove."